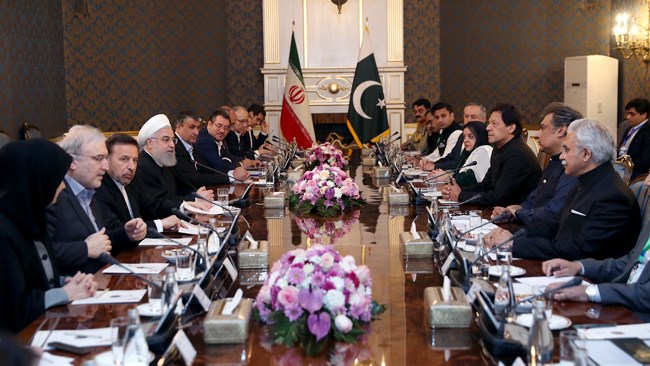 Iran has proposed barter trade and use of local currencies to boost commercial exchanges between Tehran and Islamabad.

“Regarding banking ties, we can use our currencies and barter trade to promote commercial relations,” Iranian President Hassan Rouhani told visiting Pakistani Prime Minister Imran Khan in Tehran on Monday.

The call comes as Tehran is setting up barter trade with several countries such as India in a bid to lower the impact of renewed US sanctions on Iran.

Soon after the Iran nuclear deal was signed in 2015 and little by little US and European sanctions on Iran were lifted, Iran and Pakistan agreed to ditch dollar in their bilateral trade exchanges, using their national currencies.

Back in 2016, Pakistan’s Federal Minister of Commerce Khurram Dastgir Khan supervised the signing of a Memorandum of Understanding (MoU) with Iran’s Ambassador Mehdi Honardoost in Islamabad..

“The two sides agreed in principle to open bank accounts in their respective central banks for trade transactions in their local currencies,” an unnamed official at the Pakistani Ministry of Commerce was quoted as saying.

Also in 2017, the two countries central banks signed an agreement to help raise trade to $5bn. The State Bank of Pakistan (SBP) and Central Bank of Iran (CBI) reached an agreement on banking and payment.

SBP Deputy Governor Riaz Riazuddin and Gholamali Kamyab, the CBI deputy governor for forex affairs, signed the agreement on behalf of their respective central banks in the Iranian capital Tehran.

The agreement seeks "to provide a trade settlement mechanism to promote trade between Pakistan and Iran. This mechanism will be used for the payment of trade conducted via letter of credit (L/Cs) and in accordance with international laws and regulations," said an official statement released by the SBP.

“Without a doubt, developing Islamabad-Istanbul railway (through Tehran) and connecting Europe to Pakistán and China can bring about a big change in the region,” he added in Tehran during a press conference with visiting Pakistani premier.

The railroad was inaugurated on 14 August 2009 when a freight train coming from Islamabad arrived in the eastern Turkish Anatolia province of Van on 28 August. The 6,500km (4,040 mile) trial service via the Iranian capital, Tehran, in 14 days.

The train, known as Gul train, named after former Turkish President Abdullah Gul, pulled 20 containers, including textile, cotton and medical products among others, on its maiden journey from Islamabad railway station, delivering 14 to Tehran and six to Istanbul.

The Islamabad-Tehran-Istanbul journey is 1900 kms in Pakistan, 2570 kms in Iran, and 2036 kms in Turkey. The initiative was launched to cut short 40-50-day sea journey from the Karachi Port to a Turkish port.